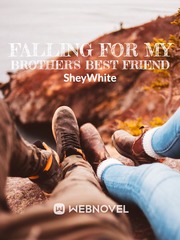 Falling for My Brother's Best Friend

What is Falling for My Brother's Best Friend

Falling for My Brother's Best Friend is a popular web novel written by the author SheyWhite, covering ROMANCE, TEEN, TEENFIC, TEENFICION, TWIN, MYSTERIOUS FAMILY BACKGROUND, Teen genres. It's viewed by 27K readers with an average rating of 0/5 and 0 reviews. The novel is over and can be read all 20 chapters in Webnovel with all rights reserved.

Most kids remember great things about them even at the age of seven. But for Devyn Walters, that's not the case. She doesn't remember anything before she was seven years old. When fate's attempt to give Devyn the happiness she deserves brings her twin brother to Arizona from Georgia, the last thing that was supposed to happen was someone following them. Especially someone who has laid claim to Devyn for years. Devyn meets some interesting people. She makes friends, and even meets someone she captures the attention of: Kyle Mason, her brother's best friend.

I hope I never lose you