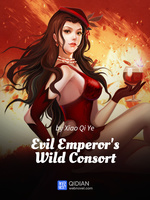 What is Evil Emperor's Wild Consort

She has come a long way. Orphaned, born a weakling, and being the infamous good-for-nothing of Azure Dragon Country. Gu Ruoyun was the shame of the proud Gu household. Falsely accused of a crime she did not commit, she was betrayed by her family and beaten to death by her own grandfather. But life took a fateful twist on that very day — she was revived. Newly awakened, she is now the Master of an ancient treasure that resides within her body. Precious cultivation pills, treasures beyond her wildest imagination and spiritual beasts, all within her grasp... She is the apple of the eye of all under the heavens, including that of a mysterious, handsome man. Now she only has one goal — to conquer the world.

The Witch CEO is NOT a Demoness [Completed] (Editing--On Process)

My Consort Has Gone Mad!