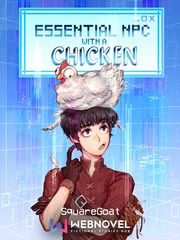 What is Essential NPC with a Chicken

Essential NPC with a Chicken is a popular web novel written by the author SquareGoat, covering SYSTEM, ARTIFICIAL INTELLIGENCE, ACTION, ADVENTURE, COMEDY, WEAK-STRONG EVOLUTION, NPC, IMMORTAL MC, Video Games genres. It's viewed by 1.2M readers with an average rating of 4.65/5 and 44 reviews. The novel is being serialized to 188 chapters, new chapters will be published in Webnovel with all rights reserved.

Bob the barn owner from Bagel village. An Essential tutorial NPC, typical of any game. One fine morning, Bob gains sentience and begins to question his immortal humanity. Immersion Online. A Virtual Reality Massively Multiplayer Open World Role-Playing Game (VRMMORPG) that took the continent of Asia by storm. In that game, nobody expected a certain tutorial NPC would dominate the meta. Follow the adventures of Bob on his journey to discover just what he really is and laugh along with his shenanigans. Just a heads-up, this is a gag novel so if you laugh you lose. If you have anything to say to me personally, send me a DM on discord at Goat#9660