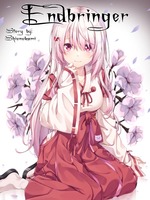 Endbringer is a popular web novel written by the author Shionokami, covering HARÉM, ACTION, ROMANCE, FANTASY, ANIME, COMEDY, ECCHI, LIGHT-NOVEL, SHONEN, Fantasy genres. It's viewed by 42.2K readers with an average rating of 4.62/5 and 124 reviews. The novel is being serialized to 39 chapters, new chapters will be published in Webnovel with all rights reserved.

40 years ago, our world believed that magic was merely fiction, and nothing more. But that all changed when it was revealed that magic truly does exist to the public. To that end, a place was created, a place where magic can be studied and taught. And that place is Takamagahara Island, the home of Kurokami Tatsuro, a young man who just wants to live his days in peace. That is until he has a fateful encounter one day, an encounter that would change not only his life but the entire world ... Hello there, Shionokami here! This story was, heavly inspired by various anime and light novels, I have watched/read, along the years! The story, is a harem with romance and action, that will be balanced, with cute and funny moments between the characters being the norm, and action packed fights also taking place! If that, sounds right up your alley, give it a read! And hey, want to talk about it or just talk about anime and whatnot? Then, you can follow me on twitter, @shionokami Cover image is merely illustrative, props go to the artist that made it (yes it's Shiina Yuika, and yes, I'm a nijisanji fan)

Maculata and the Five Suitors

The Heart of Gaia