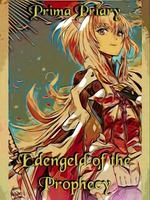 What is Edengeld of the Prophecy

Edengeld of the Prophecy is a popular web novel written by the author Priary, covering ACTION, ADVENTURE, FIGHT, MAGIC-AND-WEAPONS, DND, DUNGEON AND DRAGONS, BATTLEFIELD, Fantasy Romance genres. It's viewed by 342 readers with an average rating of 0/5 and 0 reviews. The novel is being serialized to 2 chapters, new chapters will be published in Webnovel with all rights reserved.

The Nine Hells, known as the underworld to the people. With it's ruler, the Overlord of the Nine Hells named Asmodeus. The humans have taken a part of the Nine Hells, and created a walled city. This angers Asmodeus as he doesn't enjoy the presence of uninvited guests within his realm, but this also brings curiosity to him as he wants to know the ideas and plans of the humans, their reason for visiting the Nine Hells uninvited. As he learns more of their plans he begins to grow lust for power and territory. The Nine Hells wasn't enough for him, he wanted to takeover the other realms. With the help of a powerful drow seer named Edengeld, the desires of Asmodeus can be fulfilled. The humans have taken a part of the Nine Hells, and created a walled city. Edengeld, a young drow seer gifted with magic. She works directly under the Overlord of the Nine Hells, Asmodeus. Residing in the kingdom of the drows, Noris. She begins to see visions of wars, the break between the balance of good and evil. Rays of hope begin to show themselves when Edengeld sees a young boy in her dreams. She watches over him through the orb of foreseeing, that allows her to see events of the past, the present and the future. She spectates the growth of the young boy, and through that growth she is convinced that the child is to be the child that will restore the balance and repair the stability between the Nine Hells and the realms. Going against Asmodeus behind his back, she faces the decision that can change the fate of the realms.