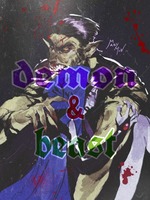 What is Demon & Beast

Demon & Beast is a popular web novel written by the author zinthxs, covering ROMANCE, BEAST, ACTION, COMEDY, DRAMA, TEEN, DEMON, OPPOSITES ATTRACT, TEEN TITANS, Teen genres. It's viewed by 1.1K readers with an average rating of 0/5 and 0 reviews. The novel is being serialized to 1 chapters, new chapters will be published in Webnovel with all rights reserved.

We were both completely different from each other. Or were we? I did not expect him to be my very first kiss, my first love. Before I realized I had feelings for him, I thought he was just a simple, ordinary guy who's talented at making people irritated and the king of bad, unfunny jokes. But I was wrong. Before I saw this. . .savage side of him, I thought he was naturally cheerful even when people reject him. But no. He was just like me, deep down inside. He had an inner demon, just like me. He was vicious, filled with burning rage. Just like me. He was bewildered and afraid of himself, afraid of hurting people if he sets his emotions out of control. Just like me. And when he sets his eyes on an attractive woman whom he has strong, overwhelming feelings for, he feels an overpowering, sometimes dangerous emotion that would most likely take control of his actions. Just like me. The things we had in common brought us together. But we had to risk many things in order for us to find each other and cross paths.