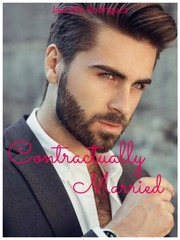 As they openly say 'life isn't fair', well for me, that's exactly the definition of my own life...not until I reached the age of 18, where I signed the most stupid arrangement and contract in my life. Do you know what consist of that 'so-called' arrangements? Well, let me tell you... it's just me and my name who and which is going to be tied 'contractually' to the end of the name of my jerk of a (so-called) husband. You heard that---Contractually? Yes. We're just going to be 'contractually 'married' for five years.. for five long years. And since it's only for five years, we don't have to act like those typical husband and wife or a lovey-dovey-couple that you can see everywhere holding each other's hands while walking, hugging, kissing.. and ohh.. eating each other's face. Because that's exactly the opposite situation of our 'marriage'. He hates me with all his guts and same with me, although I really don't know why and where his hates coming from. - - - - - - - - - - - - So, here I am... Arriana Angela Kelley- Smith, married to Alexander Jonathan Smith who is known to be one of the successful and richest bachelor 'slash' womanizer in the whole business state of California. Hmmp! little did they know, he was already married 'to me' four years ago.