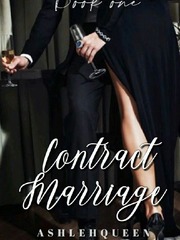 What is Contract Marriage for 7 Days

Contract Marriage for 7 Days is a popular web novel written by the author The_AshlehQueen, covering SEX, RAPE, CONTRACT MARRIAGE, BILLIONAIRE, EROTICA, CEO, REVENGE, IMPREGNATED, FORCED CONTRACT, DIVORCEE, Contemporary Romance genres. It's viewed by 1.5M readers with an average rating of 4.32/5 and 38 reviews. The novel is over and can be read all 49 chapters in Webnovel with all rights reserved.

"Please let me go. I swear I won't tell anyone." At last, I managed to say with my teary and hoarse voice while he has me pinned on my own bed. I tried to wriggle out but I was no match to his strength. I wanted to scream help and plead to him more but the lust in his eyes and his bulge on my stomach was telling me that he won't back off no matter what. "Shhhh, Don't worry sweety. Nothing will happen without your consent. So, I am giving you one whole minute to relax and give in." His mouth was so close to mine that his lips almost brushed mine while he said those words. Jane Monroe is 27, divorced, believes that she is Barren and living a life of a loner. But everything changed the night she went out to help someone. Alexander Black, 30, and an attractive bachelor. Owns casinos, hotels, some clothing brands, and a news channel. He is self-centered, impulsive and a control freak. Have connections from politicians to mafias. A lot of people mistook him as a gentleman that he certainly is not. And when a woman named Jane, slapped him. The hell opened the door for Jane. Because the next thing she found herself, is in the forced contract for seven days just for his lewd desires.