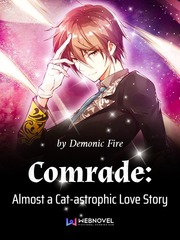 What is Comrade: Almost a Cat-astrophic Love Story

Comrade: Almost a Cat-astrophic Love Story is a popular web novel written by the author Demonic Fire, covering LGBT+ genres. It's viewed by 1.9M readers with an average rating of 4.25/5 and 501 reviews. The novel is over and can be read all 233 chapters in Webnovel with all rights reserved.

The person that Pei Zhen hates most in his life is the perfect Fu Sichen. Alas, life is full of surprises and unpredictability. One fine day, an accident turns Pei Zhen into Fu Sichen's pet cat! As Fu Sichen's pet cat, he makes a shocking discovery about his sworn enemy - a deep dark secret that the perfect Fu Sichen has kept hidden for years. Trapped in his cat body, Pei Zhen moves from one adventure into another while trying hard to find a way of turning back into his human self. When he finally does, the world as he once knew, has become a completely different place!