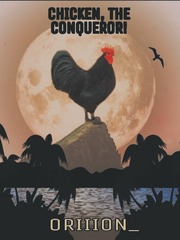 What is Chicken, The Conqueror!

Chicken, The Conqueror! is a popular web novel written by the author ORIIION_, covering ROMANCE, ADVENTURE, SYSTEM, CULTIVATION, REINCARNATION, NON-HUMAN-FEMALE-LEAD, EASTER FANTASY, Historical Romance genres. It's viewed by 69.9K readers with an average rating of 4.98/5 and 10 reviews. The novel is being serialized to 32 chapters, new chapters will be published in Webnovel with all rights reserved.

Have you ever seen a chicken conquer the world? No? Then, here it is!!! Marissa found herself reincarnated into the era of Ancient Kingdom of Nusantara, met a lots of famous and important characters that were only exist in legend. A beautiful world, a bunch of handsome men, an excited royal drama, several old and awesome dynasties, and a lots of great kingdoms combined together in the same world and era. With a system, this world should be really exiting, except... She actually reincarnated into a chicken? What's with this situation?What will happen next? Would she be able to conquer a world called Nusantara Continent and become it's ruler? Or would she be able to find her true love, help him to conquer the world and become an idol couple together? Or would she instead got defeated in the middle of her journey and ended up in a plate as a Roasted Chicken Pecking? Read this exciting story about a journey of a chicken to conquer the world and her struggle to find her way back home to earth as well as her wonderful destiny in finding her sweet love!

Pretending To Be Gilead's Prince and Master Wizard