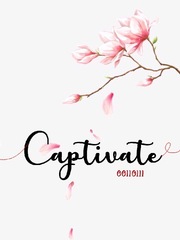 Captivate is a popular web novel written by the author 00110111, covering Romance genres. It's viewed by 2.7M readers with an average rating of 4.34/5 and 220 reviews. The novel is over and can be read all 204 chapters in Webnovel with all rights reserved.

"I want to run away from everything." Something clicked around her wrist, and Hui Yin looked down in surprise as Lu Shen bound their wrists together with handcuffs. "If you want to run away, take me with you," he said, his eyes dark. She was bullied, tricked, made fun of, and even killed. She thought he loved her, but he easily exchanged her for another woman. She thought the people around her were good, but they were the ones who stabbed her in the back. She was stupid, foolish, and innocent. That girl was dead. And now, she was reborn. [This book was previously known as ‘Revenge Sevenfold’].

The Love That Remains

Mr. Yuan's Dilemma: Can't Help Falling in Love with You

The 3 B's- Beauty , Brains and Bravery

Purple Dawn Till Dusk : dearest through the time