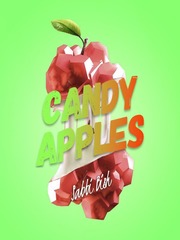 Book 1 of The Candied Fruit Series: The Apple is the fruit of knowledge and it symbolizes Anna's knowledge of the scandal with Ajax. Ajax cheated on Anna but with the reason being of not only his benefit but for the sake of his family. However, Anna doesn't know that despite thinking she does. But as for their daughter Aoife, of course, she's the one who suffered the apple's consequences. This book will be revolved around the revealing of the scandal but with Aoife heavily exposed.