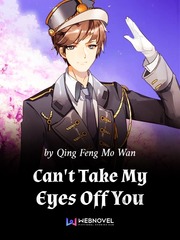 Can't Take My Eyes Off You

What is Can't Take My Eyes Off You

Can't Take My Eyes Off You is a popular web novel written by the author Qing Feng Mo Wan, covering Fantasy Romance genres. It's viewed by 3.2M readers with an average rating of 4.64/5 and 393 reviews. The novel is being serialized to 656 chapters, new chapters will be published in Webnovel with all rights reserved.

“Commander Lu, there are rumors that we are sleeping together, we have a fling!” He looked up from under the blanket and slowly got up. “What do you want from me?” “Deny it, say it’s fake, stop it from spreading…” He pushed her against the wall, blocking her mouth by a rough kiss. “Mrs. Lu, we have to substantiate the rumor.” Before she was born again, what she had been doing was staying away from him! After she was born again, what she always wanted to do was give him offsprings! Lu Xingzhi strived for two personal mottos his entire life: First, it was illegal to undermine military marriage. Two, Jiang Yao was his in this eternity, till death do they part.

The Queen of Everything

Sweet Wife in My Arms

My Hidden Wife is Sweet

Wife is Fierce, Don't Mess With Her!