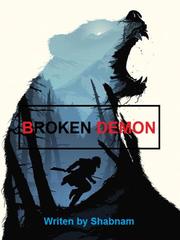 What is Broken Demon

Broken Demon is a popular web novel written by the author shabnam, covering Fantasy Romance genres. It's viewed by 88K readers with an average rating of 4.85/5 and 13 reviews. The novel is being serialized to 28 chapters, new chapters will be published in Webnovel with all rights reserved.

Louis Carter, Grade A of Archeology. A nobody, An international underdog! A big project that was going to shake up the whole department of archaeological history. the same project that Louis put all his energy and soul in it but with a simple and slightly disrespectful argument with the class professor, all his efforts gone straight to trash! now he has to prove his belief in his new project. "supernatural creature's don't exist" I mean...really? werewolves? vampires? tooth fairies? does someone still believe in this nonsense? Harry Ashford, tall, strong, and dominant. in one word? perfect! the one werewolf who had everyone's respect and submission. no one could stare him straight in the eye. so what was the problem? He was a damn beta and he needed an alpha for the big upcoming war, a strong one! and for finding that kind of alpha he had to trust a stinking prophet! now after two years, he had two options left. first option: Zayn Collins. powerful, extremely dominant, with a big and strong aura that forces everyone around him to listen. conclusion? he can be a hotshot alpha! second option: Louis carter? um... don't think so!