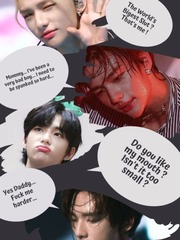 What is BRATTY JINNIE

BRATTY JINNIE is a popular web novel written by the author bibidi_bobidi_boo, covering KPOP, LGBT, NCT, MATURE-CONTENT, SEVENTEEN, ATEEZ, STRAY KIDS, HWANG HYUNJIN, HARASSMENT, Magical Realism genres. It's viewed by 2.4K readers with an average rating of 0/5 and 0 reviews. The novel is being serialized to 10 chapters, new chapters will be published in Webnovel with all rights reserved.

I watched him dance on the floor, move sensually against those hungry bodies. He loved having the attention on him, he loved the whole club watching him wiggle. I was still watching him, but this time he was with a group of three men. He was in the lap of one of them and laughing as he looked at the others. They looked at them innocently saying dirty things. He was asking if her lips were to their liking as he pouted, making them stand out. He knew the effect he was having on these people. Yet another group of men. He was biting his lip as he looked at several of them and kissed the neck of the one he was sitting on. Looking one of the men on the table in the eye, he passionately kissed the one he was sitting on and even began to grind on him. A woman this time, she was alone. She had her hand on the black haired boy's butt cheeks and was touching his hair, he seemed to like it a lot, just as much as the praise. He loved it, it always made him smile, like he had won something. He began to eat a lollipop looking her in the eye, he was really eager to have something similar in his butt. It was for these different reasons that Hwang Hyunjin was called The World's Biggest Slut.