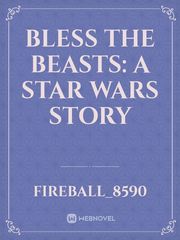 What is Bless the Beasts: A Star Wars Story

Bless the Beasts: A Star Wars Story is a popular web novel written by the author Fireball_8590, covering ACTION, ADVENTURE, FAN-FIC, SPACE, STARWARS, ROMANCE, KYLO REN, BEN SWOLO, Sci-fi Romance genres. It's viewed by 9.3K readers with an average rating of 0/5 and 0 reviews. The novel is being serialized to 7 chapters, new chapters will be published in Webnovel with all rights reserved.

Lorelai Vidal has been trapped on an uninhabited planet for twelve years after a nearly fatal crash, waiting for someone in the galaxy to find her signal. One day, a strange ship lands on her planet, but not for the reason she thought. Instead, she is thrust into the First Order as the new apprentice of Kylo Ren, the leader of the First Order and known across the galaxy as a menacing force user. But what Lorelai doesn’t know is that her link with Kylo isn’t just a coincidence, and she may be the only one in the galaxy that can save him. But can she save herself too?