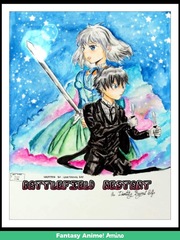 (Cover by Darkstar Dust) This is a story I worked on ages ago that has been refined and edited by adding foreshadowing to events while also simplifying the power system better than before. This story can be considered a prequel to An Adventure Beyond Greatness as it takes place years prior to the events of that story. Short Synopsis: After retiring from the battlefield, my life became empty and lifeless. The regrets of my past haunt me in my sleep. Then a change occurred, a King from another world summoned me to fight for his kingdom, but I died even before I could give him my answer. Now, after a fake God allowed me to reincarnate (albeit imperfectly) with my memories intact, into a world filled with magic and swords. Long Synopsis: This is about a flawed protagonist who only knew to rely on others and not socialise who gets a second chance to change himself in order to live the life he aimed for in his past life. The narrator isn’t exactly trustworthy since it is purely in his bias perspective while other perspectives given by others fill in the blanks that he either leaves out or twists to suit the situation. The story itself can be considered a parody of Isekai’s classic tropes which are given a sense of reality as time goes by. As there exists no ‘Demon Lord’, there is also no black and white, only characters opinions and counter-opinions throughout the story.