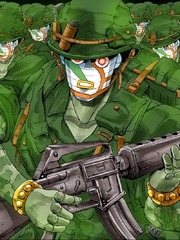 Bad Company in a fantasy world?

What is Bad Company in a fantasy world?

Bad Company in a fantasy world? is a popular web novel written by the author YoriMicah, covering WAR AND MILITARY, ISEKAI, FIREARMS, GUNS, RECARINATION, ACTION, War&Military genres. It's viewed by 10.2K readers with an average rating of 0/5 and 2 reviews. The novel is being serialized to 3 chapters, new chapters will be published in Webnovel with all rights reserved.

When Keicho suddenly witnesses, a random Stand user about to murder his own little brother after being defeated by Josuke, his heart skips a beat for some reason at the sight of it and couldn't believe what he was about to do next, and that was rescuing his little brother from actual danger. He took his place instead just in time, but it was already too late for him to do anything else. Hot chili pepper armed penetrated his chest, almost hitting his heart and felt hopeless at this harsh situation. He looked into his little brothers Okuyasu eyes and remark how useless, he was but really deep down inside, he was just glad he was alright and wasn't harmed, immediately flashes of memories of his family, and mostly his mother and little brothers faces flash before his very eyes. He tried to call out to his bad company, which they were coming to help, but it was already to late hot chili pepper immediately went back into the plug hole from the wall and taking Keicho along with him. Afterwards, he was electrocuted on the cable wires outside. He was sure that he died from what happened, but instead he woke up in the middle of a forest. He lifted both his hands and soon realized that he was in a teenager male body, and somehow in another world that was unknown to him.