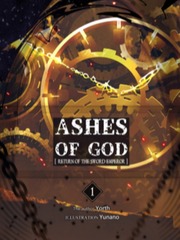 People have always dreamed of going back in time. All their regrets, all their grievances, everything could be sorted out if only they went back. Shesmu didn’t. He had his regrets but they weren’t major. He was remorseful for many things but he didn’t let them stop him. He always forged on ahead, regardless of what anyone said, regardless of the odds. In the end, he reached a place in life where he was proud. Captain of the most legendary team of Ashes of Gods, one of the strongest players in the game. But more importantly, he had a loving wife and daughter. That was until one morning where he woke up and found himself back ten years in the past. He couldn’t believe it. While most people would jump in joy, Shesmu drowned in an ocean of despair. All of his achievements, gone. All of his friends, gone. His wife, she didn’t even know him. And most importantly, his daughter. She was no more. Her smiles, her laughs haunted him in his sleep. However, Shesmu persevered. His eyes were still bright. The source of his drive was one thing. A letter. Sender—unknown. Motive left to mystery. However, it still gave Shesmu the power to push, the will to hope. It said: “Meet me in Ashes of Gods.” Discord Link: https://discord.gg/s6e5rTj Patreon Link: patreon.com/yorth (Currently 8 chapters ahead of normal release) Release Schedule: Every day at around 10:15 am gtm+1