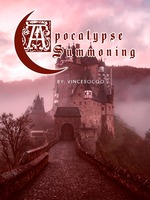 What is Apocalypse Summoning

Apocalypse Summoning is a popular web novel written by the author vincesocoo, covering HAREM, ROMANCE, CLEVER PROTAGONIST, MATURE, ZOMBIE, ADVENTURE, APOCALYPSE SURVIVAL, LEVEL SYSTEM, FANTASY, WEAK TO STRONG, Horror&Thriller genres. It's viewed by 414.4K readers with an average rating of 4.52/5 and 19 reviews. The novel is being serialized to 62 chapters, new chapters will be published in Webnovel with all rights reserved.

At the age of 22, Kio was on the way to work when screams were heard all around him. The source of all the shouting and screaming comes from man-eating humans, otherwise known as zombies. After looking for food and shelter, Kio and other people near him are trapped in a store, with zombies right outside. Shortly after, the floor beneath the group lights up due to a teleportation circle. Successfully summoning a hero into the Aeon Kingdom, the king and princess rejoice to the bright future ahead of them, but little do they know, they have brought in a catastrophe to their kingdom… Written by: VinceSocoo Cover image edited by: atarashii

My MCV and The Apocalypse

Me and My Farm in Attack on Titan

Dungeon Farming: Reborn as a Dungeon Lord, cultivating life inside a cave.