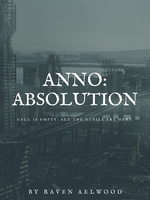 Anno is a popular web novel written by the author Raven_Aelwood, covering REINCARNATION, ROMANCE, ACTION, ADVENTURE, COMEDY, WAR, STEAMPUNK, CIVILIZATION BUILDING, MEDIVIAL, War&Military genres. It's viewed by 55K readers with an average rating of 0/5 and 8 reviews. The novel is being serialized to 32 chapters, new chapters will be published in Webnovel with all rights reserved.

After being reborn as a young nobleman in a war-stricken kingdom, James a history professor back on earth is given a fresh start at life and is transmigrated to another world- Anno. Left with nothing but a small mining town on the brink of collapse and a handful of knights James( now Levi) must use his knowledge of modern earth to device unconventional means if he wants to keep his head in such chaotic times. Follow our unlucky hero on a thrilling journey of romance, adventure, intricate schemes, and intense action as he battles his way to supremacy. Anno~ _____________________________________________ Steampunk elements Historical fiction Wars .......... Cover art, not mine source: Artstation. Discord: https://discord.gg/duAzSF Patreon: Ravenaelwood Twitter: @Raven_ael Instagram: raven_ael Pay Pal: michaelagbaje57@gmail.com