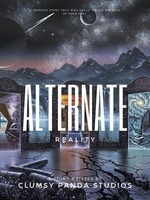 What is Alternate Reality

Alternate Reality is a popular web novel written by the author ClumsyPandaStudios, covering ACTION, ADVENTURE, CULTIVATION, DRAMA, MYSTERY, REVENGE, WEAK TO STRONG, SCHOOL LIFE, MAGIC REALISM, Fantasy genres. It's viewed by 6.2K readers with an average rating of 4.74/5 and 13 reviews. The novel is being serialized to 5 chapters, new chapters will be published in Webnovel with all rights reserved.

{ Temporarily Discontinued } Theodore Spencer, your average cliché high school movie loser. Throughout his high school career, he's bullied by the overhyped, ideal high school jock Ajax. Upon the passing of his closest friend, he slowly discovers his powers with the guidance of Dax his dead friend, but no worries, his ghost would be there to stalk Theo until they find the murderer. As he slowly loses touch with reality, the ghost of his friend is the only thing keeping him sane. Throughout the wild goose chase he’s been led into countless tricks and traps, will he get to avenge his best friend or will he die in the process trying. Read and follow Theo as he ventures on a journey into the supernatural world and second dimension as he slowly comes to his demise.