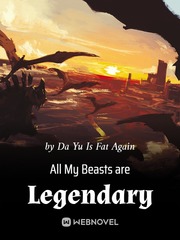 All My Beasts are Legendary

What is All My Beasts are Legendary

All My Beasts are Legendary is a popular web novel written by the author Da Yu Is Fat Again, covering Eastern Fantasy genres. It's viewed by 1.8M readers with an average rating of 4.33/5 and 180 reviews. The novel is being serialized to 172 chapters, new chapters will be published in Webnovel with all rights reserved.

In the era of Beast Taming, Ye Xuan with his superior Beast Editor, claims that he can turn even a snake into a Divine Dragon that soars across the nine heavens. Hence, the little monkey he tamed became a Deific Ape. The little birds he raised became a ginormous roc.