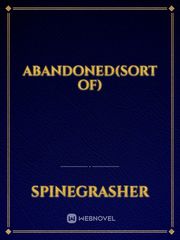 Abandoned(Sort of) is a popular web novel written by the author SpineGrasher, covering ACTION, ADVENTURE, EVOLUTION, NON HUMAN MC, TOUGHMC, UNNECESSARILYCRUELMC, Horror&Thriller genres. The novel is being serialized to 1 chapters, new chapters will be published in Webnovel with all rights reserved.

(I’m reposting this with an actual picture I apologize I’m new to this site) A man was at a zoo in a drunken stupor wondering why his life sucked so much when one of his drunken buddies decided to make a bet between the three of them and wanting no part in any of the likely stupid shenanigans they were gonna get up too, he began stumbling away bumping into everything in his path. But while stumbling away from them, he came across a passed out Zoo Keeper by one of the lion enclosures and decided that a superiority affirmation was in order, after all man had conquered lions long ago and used them as entertainment. And as you can guess it didn’t end very well for him and now stuck in the body of a lion cub with seemingly insane spurts of growth he began his new life paving it all in blood and fights.