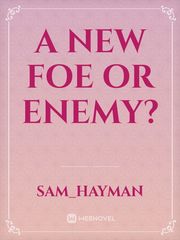 A new foe or enemy?

What is A new foe or enemy?

A new foe or enemy? is a popular web novel written by the author Shane_Hayman, covering ACTION, ADVENTURE, R-18, DARKNESS, LEGONINJAGO, LEGONINJAGOOC, Fantasy Romance genres. It's viewed by 1.1K readers . The novel is being serialized to 4 chapters, new chapters will be published in Webnovel with all rights reserved.

Sensei Garmadon had found a small snake girl in the woods behind where he'd train his students. Almost..as if he was to find it. A note was attached to a piece of cloth that stayed on by a few threads. "Who or what are you.." The old Lord Garmadon said, he new something was off about the snake as the colours was similar to that of The Overlord, which the ninjas had defeated. He narrowed his eyebrows as he read the note 'Hello, my name is Onna Kuchisake. I do not know if I was adopted or not. If I was, I do not remember them. It's been along time since. I've been sent to look for Garmadon as I was told he could train me. Everything I need is in the basket next to me. Oh! You may rename me, but keep this note on you so you know my real name. My mind has been set to that of a child. Good luck ~Onna' Want to find out what happens to them along the way? Read on. Check inside for him warnings.