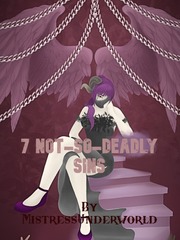 7 Not-so-deadly sins is a popular web novel written by the author MistressUnderworld, covering REINCARNATION, ROMANCE, ADVENTURE, SUPERNATURAL, FANTASY-ACTION, FANTASY-ADVENTURE, MAGIC-AND-WEAPONS, TEEN-DRAMA, SUPERNATURAL ABILITIES, DEMON-HUMAN WAR, Fantasy Romance genres. It's viewed by 108K readers with an average rating of 4.43/5 and 14 reviews. The novel is being serialized to 97 chapters, new chapters will be published in Webnovel with all rights reserved.

A group of rebellious and unique teenagers were dragged into an action-filled story as an evil presence threatened the balance of the world. Their youngest member's mysterious past had finally caught up to her as a cycle of curse repeated itself. Follow The Sins as they were forced to walk on the path of righteousness.

My Immortal Crush: Curse of the White Wolf