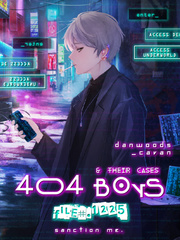 404 Boys and Their Cases

"I'm a dead man, no law sanctions me now."——Delta. Ash Auberon, a young special agent had led his squad into shattered pieces after an incident that caused the death of their former leader, Zero and his favourite apprentice, Delta. Delta is now back alive with a list of targeted victims to kill, forcing Ash to work together again with his former rival-teammate, Remington Develier. With the twist and turn along their journey, they found 404 Underworld users are all around them leading them to have connections and complicated relationships with them. Well, it might be cool having friends with illegal skills, who knows? "Let's play a game, nac uoy fi em hctac"——???_ ???:\404Boys>This is a work of fiction, any resemblance are all purely coincidental_ ???:\404Boys>Content suitable only for adults ages 18 and above. May include prolonged scenes of intense violence, strong languages, LGBT+ sexual content, illegal behavior, and/or twisted psychology content_ ???:\404Boys>New chapter every Weekend (8 vol in total)_