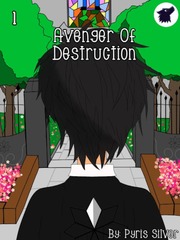 In the year 710, Demonic beings invaded the world of Astil. After conquering one of the four continents. They declared war against the human race engulfing the world in chaos. After a century of fighting the human race finally reached an agreement with the demon race stopping the constant fighting. The humans entered an age of development under the leadership of the Third Divine King. ​ Years later a Civil War erupted between the Black Dragon Clan and the Royal Family. As a result of the war the Black Dragon Clan was destroyed, it’s members either dead or scattered. The Divine King ordered set up a bounty to find and kill the remaining members of the clan. These actions led to the dissatisfaction of multiple powers. Under the belief that they would betray him, the Fifth Divine King started another civil war deciding to weaken those who weren’t fully loyal to him. ​ Years later a man and his wife who managed to escape the clan and their pursuers managed to give birth to a baby boy who they believed would be the clan’s successor because of his black and red heterochromia eyes. His parents decided to send him to the most prestigious mystic art academy in the Mistrom Kingdom. He stayed hidden with his parents until he was nine years old and entered the academy carrying the responsibility of his entire clan on his shoulders all their hatred and rage along with the hope of revival.