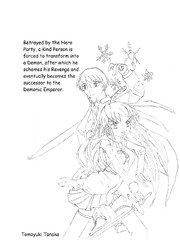 The Demonic Emperor has ascended to the pinnacle of cultivation, only for him to be betrayed and surrounded by forces of the Seven Sacred Sects. Obviously you know how this will end. After blowing himself up and swearing revenge, he reincarnates into the body of a human trash (no, not the kind of trash you're thinking of). Accompanied by a talking Magic Carp, he aims to slowly recover his strength, reclaim his empire and save his former demonic followers from the tyranny of so-called righteous sects and supposedly orthodox martial artists.