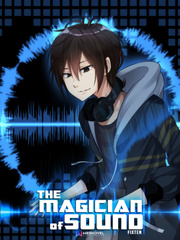 After the strange phenomenon in the 21st century where animals became Magical Beasts and overturned civilization, humanity was graced by another power called Magic. Controlling Fire? Summoning lightning? Or even manipulating the air?—Children of the next generation started having the ability to control elements. Thus, people called them Magicians. However, how about the sound? Enhancing Broadcast System? Hearing Aids Magic? Humanity has yet to find a good usage of Sound Magician until Kai Carter is born. He, who was born with Extraordinary Hearing, only wants to have a peaceful life. However, the world does not let him so as troubles keep coming into his life. Follow Kai as he uses his extraordinary hearing to give birth to many unique Sound Magics to protect his family and have a peaceful life. Discord: https://discord.gg/HYvMbb4