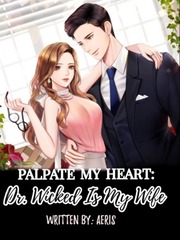 PALPATE MY HEART: Dr. Wicked is My Wife

…. I will never clip my wings for a man. I will never bow down to anyone. I, Jingyi will rise from the graves to take back what's mine. .... “You can never be anyone’s. Only Mine.” .... Jealousy and greed pushed Qin Jingyi’s family to the cusp of death. Desperate to flee from her captors, Qin Jingyi threw herself at sea. As the flurry of rain pattered on her dying body, she cursed the heavens for her fate. Perhaps the gods pitied her that when she opened her eyes again, she finds herself in the modern times, in the body of Luo Jingyi. With a second life granted to her, which path will she tread on? Especially that the similarity of this world to her previous, is very uncanny. With scheming bitches and all their entourage on her tails, will history repeat itself? Or will she, Jingyi finally stand at the pinnacle's edge as a victor? * With his dimpled grins, Yun Jinghan can make anyone's heart melt. But no one knows, his carefree countenance is nothing but an outer shell. Beneath the facade is a devil in disguise. A wolf in sheep's clothing. Unknown to the world, he's the powerful man behind the giant, Terra Firma Corporation. He crushes businesses like ants and kills enemies with one decisive move. He is truly, a certified villain in the business world. His heart belonged to none. Not until he meets Luo Jingyi. Eight years since coming to the present world, Jingyi had lived her life quietly. She has built her reputation as one of the best trauma and cardiothoracic surgeon in the country. She’s a perfectionist and driven to succeed. At the same time, she avoids emotional entanglement with other people. Her not so complicated life decidedly turned less so when she gets entangled with a shameless devil who wouldn't take no for an answer. The dashingly handsome billionaire became her instant fiancé. What kind of love story do you think will unfold between the two? Will Yun Jinghan be able to warm her heart that has been frozen because of her past? On top of that, with enemies lurking at every corner, will they defy odds to walk down the aisle of happy ever after? Jump in and brace yourselves because their love story's going to rock your world. ..... A/N: NO RAPE or MAJOR MISUNDERSTANDINGS The cover isn't mine. Credits to the owner. ..... An original story of mine posted only on Webnovel. Discord link: https://discord.gg/mxy3CD8