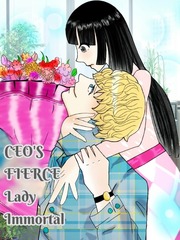 She was a hot-blooded & fierce cultivator in her past life. After transmigration, she became a useless psychopath and crazy being admitted to a mental hospital. This was the most shocking moment of her life. What's even more, that she became crazy because of her broken engagement to a young heir. Everyone now looks up to her with pity. She is deemed as a crazy woman because of her love for him! Everything is messed up when she took over the body. Su Ci Yi is not a woman who needs to prove herself to others. She will act as hell crazy and trouble those people who have a debt towards her. The mental hospital was her home and the doctors are now her trusted aides. The patients her friends and the mental establishments her entire household! However, even though she acted like a total idiot, there is someone who notices her small actions. Qin Xiao Yu, a business tycoon who recently dominated different industries, has come to declare his domination towards her. ------------------------------------------------- "You want a kiss? Hmph, fight me! You win, I'll give what you want!" Su Ci Yi glared like a ferocious wild animal. Qin Yu was leaning on a hard wall, trapping Su Ci Yi within his arms. Their breaths are not afar along with the rhythmic beating of the chest. One was loud and blaring. The other was calm like the serene waves of the ocean. Qin Yu's deep eyes landed on those thin rosy lips and gulp. Even before he could pluck the peach blossom, he received a heavy blow below. Su Ci Yi cracks her knuckles, lunged a kick and without mercy shifted her position pinning the man on the wall, arms on his back. Now, their position is completely reverse. However, an abrupt military footstep advances towards her. Seven men in a black suit with sunglasses stopped in front, only a meters away aiming a 5.56 mm M-16 head on straight on Su Ci Yi's head. Su Ci Yi: "..." This is a comedy-fantasy romance between an aloof-and-extroverted-inside-female-lead x sadistic-domineering-warm-inside-male-lead:) Reminders: Updates (5-10 chapter/week) Chapter length (800-1200 words) Picture is taken from unknown (Credits to the owner) I am not writing to win an Oscar Award, please don't expect excellent grammar. (Thought I'm learning it little by little.) Wanna chat? Add me on my discord: MissTeaPretty#8099