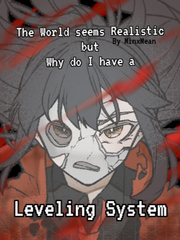 Sheila is an average girl who likes to play video games and watch animes in her free time. If there’s anything that stood out from her, that would be her beautiful appearance. Due to spending too much time playing video games till late at night, she would usually forget to do her homework which she would, later on, asked her best friend, Ria, for help. A total average gamer-otaku girl. Like any other day, Sheila was walking her way to school when suddenly the phone in her pocket vibrates. She pulled it out of her pocket to check with the expectation of seeing a new message, but the result was something that would change her entire life completely upside down. Leveling System, it was a mysterious app which suddenly appeared inside her phone. By using it, she could level up like the character in the game and become stronger. But what would an average girl do by becoming stronger? Not expecting to fight anything absurd in her daily life, Sheila slowly adapts to her new life of leveling up inside an instant dungeon. But out of nowhere, A goblin appeared in front of her somewhere in the alleyways. Where did it come from? Not knowing anything, Sheila ended up killing it. That night, She woke up to a nightmare where the world turned chaotic as monsters run rampage everywhere, it was a world where a weak human life was nothing but garbage, a world where strong prey the weak. She believes it was a premonition of what her future would be if she does nothing. Will she stand up and take responsibly to fight for others? Or would she be selfish and only fight for her loved ones? The fate of the entire world is on her hand. Her decision will decide the outcome of everything. *** Important note: English is not my first language, so do expect to see a grammatic error and if you're such a kind and big heart person and would willing to help, feel free do so as I appreciated any sort of support. I'm also a new author who only wrote the story because purely for my own pleasure. Be warn though as the story progress and development is very slow. I started writing this story out of spit of not having anything interesting to read, do expect some cliche since this author likes it. *** The characters design followed by tiny bits information(Be warn as it would be a spoiler to the new readers!): https://imgur.com/a/fpuXzKB If you like the story, please give some power stone, any will be appreciated! Release rate; 5 chapters/a week. Monday-Friday Chapter released at 20:00-22:00 8+ GMT The art that was used in the book cover is not mine, credit goes to the rightfully owner. *** Discord: https://discord.gg/2JMqZ3e Support me: Send me a cup of coffee: Ko-fi/minxmean Patreon: patreon.com/NEETGuy