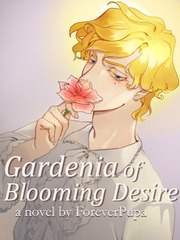 This is a love story between Young Grand Duke Aster, and his slave, Ramuja. Separated by their status, they went through a series of struggles, misunderstanding, and madness until their love fully blooms under the Oath of Gardenia. This is their story since their first encounter, their life in the grand duchy, their separation, and reunion, and their story to fight against the world. The complicated feeling of dependency, manipulation, and the greater power behind their budding and blossoming love. This is the tale of the royal family, politics, forbidden love, madness, revenge, and the taste of a 'Gardenia Kiss'. "If having you means blasphemy, then teach me how to be blasphemous." - Aster. "I am nothing and have nothing, but Young Lord, my breath is yours." - Ramuja. __________ This is Yaoi/LGBT/Boys Love with politics in it~~ Expect: - Manipulative, Yandere MC, Yandere MLs, basically a lot of Yanderes~ - Lots of love triangles. - Heavy politics with many schemes. - Drama and angst. - Pssh... Author has decided to add saucy scenes, there will be 18+ scene and 21+ scene later (っ´ω｀c)