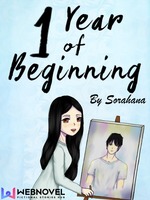 What is 1 Year of Beginning

1 Year of Beginning is a popular web novel written by the author Sorahana, covering ROMANCE, CHARACTER GROWTH, MODERN, COMEDY, SLICE-OF-LIFE, NO MISUNDERSTANDING, SWEET LOVE, CONTRACT MARRIAGE, FEMALE PROTAGANIST, PAINTER, Contemporary Romance genres. It's viewed by 1.6M readers with an average rating of 4.73/5 and 87 reviews. The novel is over and can be read all 197 chapters in Webnovel with all rights reserved.

“Give me one year of your life and I’ll give you the money you need.” Feng Mian is a normal and down to earth modern woman. She just wanted an ordinary life, an ordinary job and find an ordinary man to marry in the future. (Yes, all should be ordinary). But when family matters took a turn for the worst, she faced a huge dilemma called shortage of money. Suddenly, a contract came due to a series of coincidences. Zhang Liang was fed up with his father's (yes, father not mother) matchmaking schemes for him. He wanted to have a peaceful year because this was his chance to expand his business overseas, yet his father didn’t seem to get the message. When an ordinary fresh graduate employee in his company accidentally saw a scene, he decided to take the chance. “Since she has a normal background with nothing remarkable, nothing should go wrong, right?” Browsing through the contract, Feng Mian gritted her teeth. 'Fine. It was just one year of my life anyway. I wouldn't lose a lot.' But was it true? Or would that one year turn out to be a ride full of ups and down for both of them? ... Story set in modern era in fictional country. This story is purely fiction, any similarities with real life's event is purely coincidence. Special thanks for CatarinaM2811 for making the cover Word count: 900-1800 words/chapter Discord: https://discord.gg/pBy2wGB If you wish to support me (^-^) Paypal: https://www.paypal.me/sorahana2 ko-fi: https://ko-fi.com/sorahana Patreon: https://www.patreon.com/sorahana Note for those who read Sorahana's other novels: This novel took a different approach compared to my other novels because it focused heavily on romance and also in main lead's perspective. follow me on IG: sora100518

Because I simply love you

Mark of the destiny

Vengeance To The Royal Ones